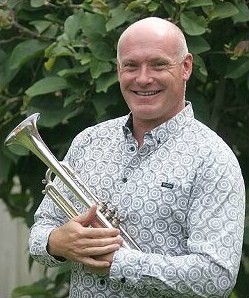 A former New Zealand National champion, John is now one of the country’s finest instrumentalist entertainers providing music on both Trumpet and Flugel Horn as well as vocals. A former winner of both cornet and flugelhorn horn solo championships, John has also been awarded for his talents as a professional entertainer winning a Scroll of Honour for his achievements in the New Zealand Entertainment Industry, the “Agnew Award” for Excellence in the New Zealand Entertainment Industry and the 2016-17 Top Musician of the Year, presented to him by the Variety Artists Club of New Zealand. John has competed twice in Holland at the World Brass Band Championships as a representative in the National Band of New Zealand. They were awarded 4th place in 2009 and an impressive 2nd place in 2017. John’s solo act can be performed in cabaret style, providing back ground music, or music for dancing, classic covers are performed from well known artists as well as the trumpet favourites from the likes of Louis Armstrong, Herb Alpert and Eddie Calvert. All played in a style that is very much John McGough. Credits include:

He has toured worldwide, played in many of New Zealand’s major venues and can be accompanied (on request) by the sensational dance troupe Danceforce. Live shows also incorporate vocals. Music from Joe Cocker, The Commitments, Van Morrison, Stevie Wonder are favourites with the crowd. John works with backing tracks making him much more economical to hire than a band. Click on the samples below for a preview of some of the tracks off Johns CD “Two Shades of Brass”. The full album is available on iTunes, Spotify, Google Play and now on all International Air New Zealand inflight entertainment menus.